All images and videos are under copyright ©

Launched in 2016, Knotting Bells provides a host of customized photography and videography solutions to cover every single aspect of your special day. With a team that comes from a commercial and lifestyle photography background, their styling and lighting techniques have hints of fashion elements, which adds glamor and endearing touches to make your big day seem larger than life, straight out of a movie!

The company caters to clients from across the world. With the belief that every photograph has a story to tell, the team at Knotting Bells understands the importance of photography; rest, they let their pictures do the talking. Knotting Bells have captured some popular couple weddings over the years including TV actors Rubina Dilaik and Abhinav Shukla, Nusrat Jahan & Nikhil Jain, Sumeet Vyas and Ekta Kaul & Suyyash Rai & Kishwer Merchant. 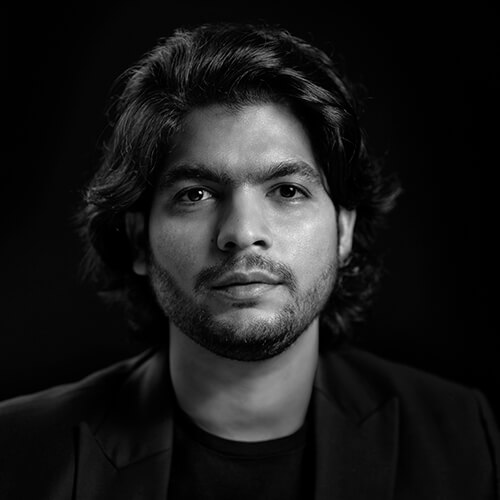 Shrey Bhagat is the Co-founder and one-half of the creative brains behind Knotting Bells. A mass media graduate, he went on to assist renowned photographer, Jatin Kampani. He dipped his toes in advertising for the first 4 years of his career and worked with X Advertising where he learnt a lot about branding, marketing and publicity. The Art of freezing time and capturing a moment that will last forever is what inspired him to take up photography. So, he took up independent photo shoots for renowned global brands including PVR, L'Oréal, Soie, Femina & Filmfare and worked with several Bollywood celebs including Aditi Rao Hydari, Amy Jackson, and Isha Talwar amongst others.

It’s been 6 years since he founded Knotting Bells and has shot more than 250 weddings but there is certainly no stopping him. Thriving on the adrenaline rush he feels while capturing the most special day in a couple’s life, he has shot more than 250 weddings not only across India but also the world, including the Maldives, Lake Como (Italy) and the Bahamas. Catering to Indian and global sensibilities alike, Shrey is passionate about documenting weddings and lends his own touch and finesse to every shot. With a keen sense of dramatic lighting and angles, his eye for composition is something else! He can go to great lengths to get that perfect shot and it is this winning attitude that translates well into his work.

Indian weddings are a riot of colors, sounds, culture, raw, real emotions and there is no place he’d rather be than capturing all of this action from his unique perspective. Wedding photography allows him to be surrounded with warmth and love - something he deeply treasures.

Much like every couple and wedding, Shrey takes a very personalized approach to his work. He loves to capture the essence of the wedding and create images that stand the test of time with a combined approach to directed portraiture and photojournalism.

An avid traveler and photographer, his job allows him to enjoy both just about equally. In order to expand the boundaries of his imagination and creativity, he loves watching movies. 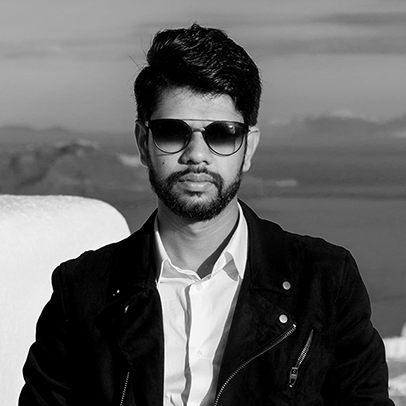 One half of the creative vision at the company, Rajesh Satankar co-founded Knotting Bells in 2013. After having completed a Bachelors of Art degree followed by a Diploma in Applied Videography in 2011, he also pursued a Masters in Social Anthropology at Goldsmiths University of London, UK in 2018. He has conducted in-depth research on Indian wedding photographers, and studied the role of the caste and class system within the very same profession. Since 2010, Satankar has been compiling a photo essay titled ‘Spiritual Journey’ and ‘Korku Tribe’, depicting spirituality in humanity and the lifestyle of the Korku tribe living in the remote regions of Madhya Pradesh respectively.

Having professionally shot over 250 weddings in exotic locations around the world in the last 8 years, Rajesh is brimming with ideas and is ever-ready to take on new adventures and explorations. A quintessential shutterbug, he has been sharing eye-pleasing stories through his lens for over 12 years now. Each of his images teleports you in a way to the moment when it was captured, bringing out the warmth, mood and personality of the setting and subject.

Being someone who thrives in unexpected situations, Rajesh encapsulates in his clicks what the naked eye often misses glimpses of, stopping time forever and storing the beauty of nature. Versatile as he is, this photographer’s photo essay series is a black and white collection, completely contrasting the vibrancy of Indian weddings but mesmerizing nonetheless.

Nuptials have been life’s biggest moment for Indians for many decades gone by, and their grandeur and lavishness continues to hold true till date. To be able to shoot the coming together of not just two people but their entire families in a union set to last for the rest of time is something that deeply drives Rajesh, and his dedication towards this showcase of love is visible in all the work he has done thus far. Combining portraiture, editorial photography and the candid style is what he loves most.

Despite photography being a part of his daily routine professionally, Satankar also has a passion for exploring spirituality and Indian culture by means of his lens, for which he travels whenever work permits. Over the years, he has won several accolades for his creative work, such as from the International Photography Awards USA, The London Photo Show, Monochrome Photography Awards, Weddison Photography Awards and Black and White Spider Awards, to name a few. To add to his long list of achievements, Fujifilm recently announced Rajesh Satankar as their X-mentor.

Rajesh, with his team of over 20 photographers and editors over the past few years has shot weddings of television actors like Rubina Dilaik and Abhinav Shukla, Nusrat Jahan & Nikhil Jain, Actor Sumeet Vyas and Ekta Kaul & Suyyash Rai & Kishwer Merchant, where Knotting Bells introduced the viral trend of the Mannequin Challenge, a major win for Rajesh and his team. 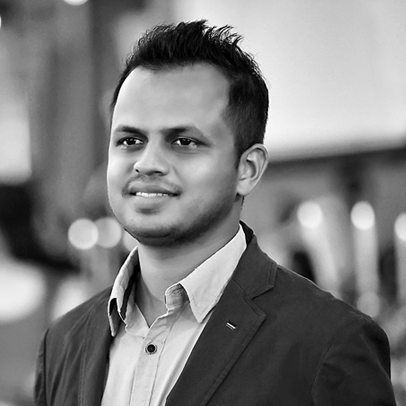 After graduating from Film making institute and to pursue his dreams in creating stories, Sachin landed up in Mumbai to turn his visions into reality.

During the learning process, he was fortunate enough to get explored and work with celebrated names from the Bollywood industry. He has worked on films like Revolver Rani (Hindi), Sangto Aika (Marathi) and Traffic (Hindi).

This exposure grew on him and from capturing reel stories he turned his eye on real story telling and documenting the priceless tears, the unforgettable laughter and making a memory of a lifetime for every newly wed nuptial.

Today he not only shoots weddings but also celebrates the power and journey of love.

We are in the News

Our work has been appreciated and featured in some of the top magazines and online portals globally.

We are ranked as one of the top Candid Wedding Photographers and Cinematographers of the country.